Many Bibliomation libraries are adjusting their services at this time. Please contact your local library staff or consult their website for more information about the services they are providing.
HomeLibrary Web Site Best Sellers & Award Winners Nutmeg Awards & Nominees Charter Oak Children's Book Award Kids Catalog Get a Library Card

To kill a mockingbird [sound recording] / by Harper Lee. 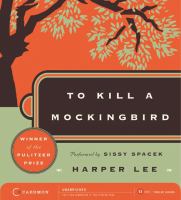 To see other titles in our catalog that have won the Pulitzer Prize, click here.

View other formats and editions

View all formats and editions (9)

Search for related items by subject

To Kill a Mockingbird
by Lee, Harper; Spacek, Sissy (Narrated by)
Rate this title:
vote data
Click an element below to view details:

To Kill a Mockingbird


To Kill a Mockingbird is an American classic, a timeless story of a young girl growing up in a sleepy Southern town and learning the true meaning of human dignity and justice. Scout Finch, daughter of the town lawyer, likes to spend her summers building treehouses, swimming, and catching lightning bugs with her big brother Jem. But one summer, when a black man is accused of raping a white woman, Scout's carefree days come to an end. In the county courtroom, she will join her father in a desperate battle against ignorance and prejudice. When it first appeared in 1960, this extraordinary novel became an instant best-seller, winning a Pulitzer Prize and triumphant critical success. Compassionate, dramatic, and deeply moving, To Kill a Mockingbird explores the deepest roots of human behavior-innocence and experience, kindness and cruelty, love and hatred. Harper Lee always considered her book to be a simple story. Today, it is universally hailed as a masterpiece of American literature.
► Shelf Browser
► MARC Record
◄ Search Results Showing Item 5 of 24
◄ Previous Next ►